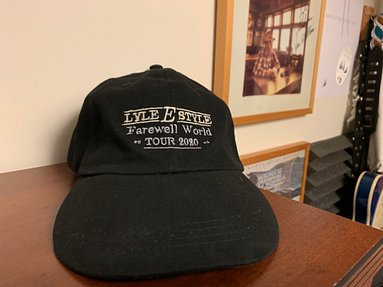 Not so FAQ
If there are questions, sometimes these are the answers...

At one point, Lyle E Style, his management and Webmaster received hundreds of emails monthly asking a wide variety of questions. To save time, they have documented the most popular questions and posted them here (a concept they called “FAQ”). If your question does not appear on this list, please feel free to contact any of the crew at Electric Recordings or email lylesomething@gmail.com

Is Lyle E Style his real name?
Lyle’s real name is Doug E Style but he legally had it changed when he turned 21. The reason he changed it is because while growing up he was tormented by classmates and peers by being called “Doggie Style”. When it got to the point that he started dating, things got worse and he was advised by a friend to change his name. That same friend suggested he should see a psychic to see what he should change his name to. Upon going to the psychic he was told that a reading was $40. He explained to her that he just wanted to ask her one question and only had $20 on him. She took the twenty and asked what his question was. He answered “I want to have a successful career in the music industry and need to change my name because everyone makes fun of my current one”. She asked him what his name was, he answered “Doug E Style”, she looked at the twenty dollar bill, shook her head and answered “change it to Lyle E Style”. As he walked out of her office he heard her laughing but stuck with it anyway, just to be safe.*

*Please note: The above answer was interpreted by an intern from the summer of 2006 who found the sketches of the failed storyline of the first full issue of the Lyle E Style comic book series which was anticipated to be released by Marvel Comics (which wasn’t and probably never will be due to lack of interest by almost everyone except Style himself). The pilot one-page comic can be found on this site. We can confirm that Lyle E Style is legally his first and middle names.

What does the E stand for?
Mr. E Style’s middle name is E - no periods and no quotation marks. It doesn’t stand for anything other than a letter in the alphabet that comes after D.

I would like to interview Lyle or have him as a guest on a show. Who should I contact?
Best way to do it is by sending him an email direct at mrestyle@shaw.ca

Where can I order “Ain’t Got No Cigarettes – Memories of Music Legend Roger Miller”?

The book is now out of print. There are very limited printed copies available on this website. The book is still available as an e-book worldwide. More info available at www.greatplains.mb.ca

What kind of music does Style listen to?
Lyle listens to all kinds of music. His favorites are Roger Miller, Alice Cooper, Bobby Bare, Waylon Jennings, Merle Haggard, Mickey Newbury, Bob Dylan, Johnny Cash and the list goes on. We are told he listens to mostly “Outlaw” Country music from the 70’s but he’s been seen purchasing CD’s ranging from Charlie Robison, Gram Parsons, Nancy Sinatra to Jann Arden.

Where does he live?
Style has lived all over the place (Nashville, Vancouver, Branson, his car, etc) but has now settled in Winnipeg, Manitoba, Canada.

I recently came across a large sum of money. Can I invest in any of Lyle’s projects?
Yes, there are a number of projects that Lyle accepts financial investments for. Each one has a business plan and provides a lucrative money making opportunity. Email mrestyle@shaw.ca to discuss further.

Where did Lyle get those platform cowboy boots?
That is one of Lyle’s many inventions. He designed them and then had them custom made. As far as we know his “KISS Cowboy Boots” are the first and only of its kind. The boots themselves showcase his unique style and his influences and definitely make him stand out in a crowd.

I think Lyle may be the father of my child, is he rich yet?
Style’s legal team have released this statement: “Mr. Style is neither rich nor accepting any paternity suits at this time or in the near future.”

How many songs has he written?
188

Can I record one of his songs?
Yes, email him direct for details: mrestyle@shaw.ca

I’m thinking of using Lyle’s unique book concept to write a book on someone in the entertainment industry. Can you please have him send me the contact information to every celebrity that he’s ever met?
Unfortunately, out of respect to them and common sense, the answer is no. We suggest contacting their publicists and/or management. Please feel free to contact Style if you do have any other questions regarding his book, he is very approachable and accommodating.

Is the "Don't Bend For Coppers" (AKA The Life and Deaths of Johnny Kitsalano) movie based on his manager Mr. Kitsalano?
Style claims that their names are purely a coincidence and the script was written prior to even meeting him. He saw it as a sign but for years he has regretted his decision to hire Kitsalano as his manager.

Is there any chance of hiring Lyle for a private function, venue or event?
Absolutely! You can do it with Style: acoustic, solo production or with a full band. Contact mrestyle@shaw.ca with details and we will do our best to accommodate you.

How can I get Lyle to marry me?
Lyle is a legalized marriage commissioner or “Justice of the Peace” in Manitoba, Canada. If you would like to get married in Winnipeg or elsewhere in Manitoba, please email him at lylesomething@gmail.com with details (when/where/etc). You can also find a dedicated webpage on this site.

When will Lyle E Style perform in my city?
All 200 dates of Style's "Farewell World" Tour 2020 have been cancelled. We overheard at the office over 2500 tour hats and shirts were destroyed because of it (one had survived - photo below). If and when it will be rescheduled is TBA. It may be worth noting, Style is at his peak of unpopularity so don't hold your breath. Style did say on the phone he hopes his "2020 Farewell World Tour" will happen in 2022 although the tour name is not expected to change.